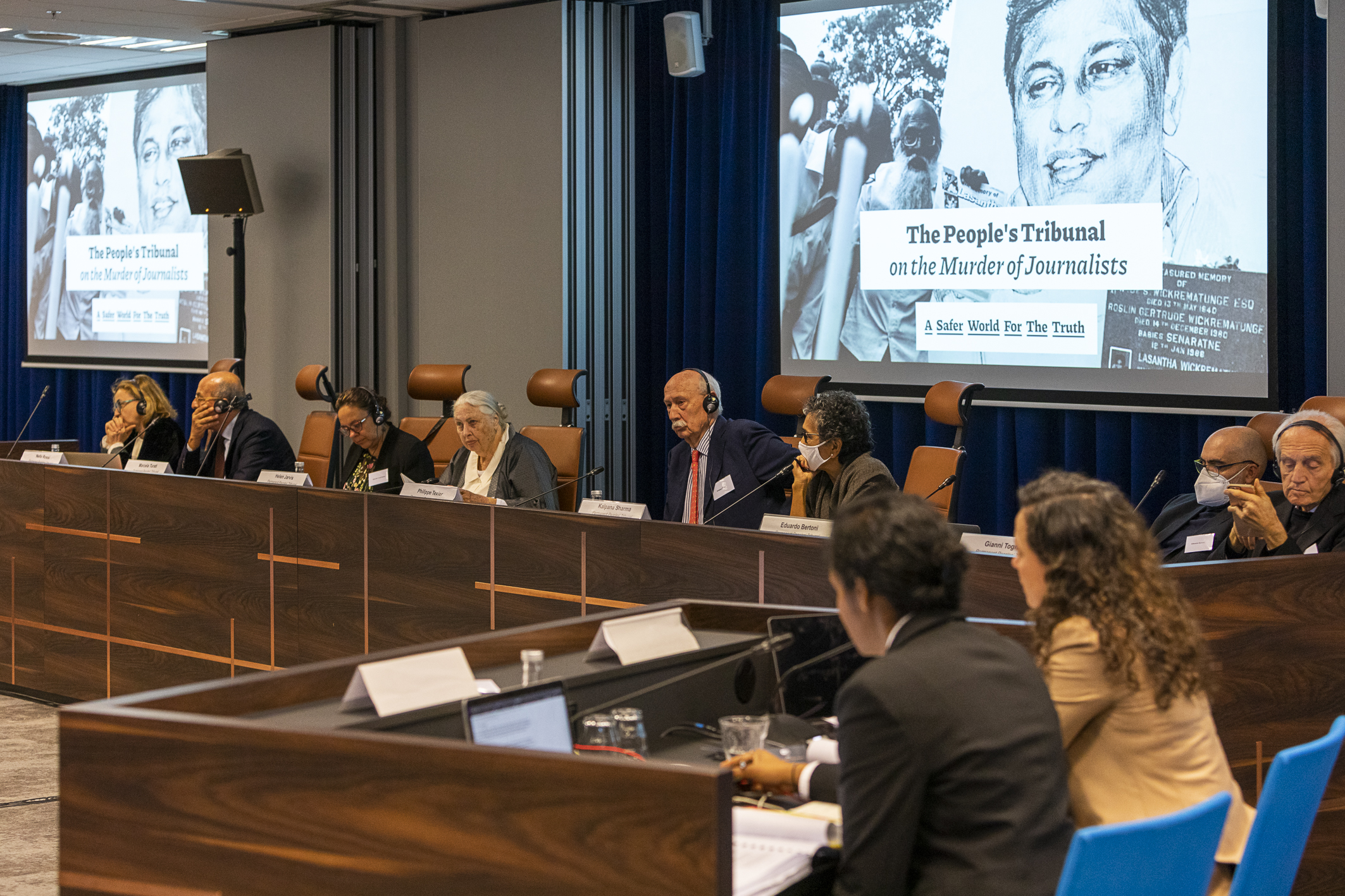 The Hague, 9 May 2022 – In an unprecedented effort to achieve justice in the killing of journalists, three leading press freedom groups launched a People’s Tribunal in November 2021 to hold governments accountable. The Tribunal, a form of grassroots justice, relies on investigations and high quality legal analysis involving specific cases in three countries. The next hearings of the Tribunal will take place in The Hague: the Sri Lanka Hearing on 12 and 13 May, and the Syria Hearing on 16 and 17 May. Watch the hearings here.

Violence against journalists is on the rise worldwide. Since 1992, over 1400 journalists have been killed, and in eight out of ten cases when a journalist is murdered, the killers go free. In response to this ongoing impunity crisis, the People’s Tribunal on the Murder of Journalists, spearheaded by the Free Press Unlimited (FPU), the Committee to Protect Journalists (CPJ), and Reporters Without Borders (RSF) will continue its hearings between 12 and 17 May.

The Prosecution of the Tribunal, led by international human rights lawyer Almudena Bernabeu, selected three emblematic cases to demonstrate this systemic failure of states to protect journalists. Following the Mexico Hearing in Mexico City on 26 and 27 April, two cases will be presented in The Hague between 12 and 17 May.

On 12 and 13 May, the Sri Lanka Hearing will be convened to present evidence on the context of crimes against journalists in Sri Lanka and the specific case of journalist Lasantha Wickrematunge, who was murdered in 2009. Witnesses include former UN Special Rapporteur Juan Mendez, activist Sandhya Eknaligoda and the Deputy Chair of the High Level Panel of Legal Experts on Media Freedom Catherine Amirfar. Technical and case witnesses will present new evidence about the attribution of the crime. The hearing is convened in partnership with the Center for Justice and Accountability.

On 16 and 17 May, the Syria Hearing will feature evidence about the pattern of crimes against journalists in Syria since the start of the war in 2011, and the emblematic case of journalist Nabil Al-Sharbaji, who died in arbitrary detention in 2015. Witnesses include journalist Hala Kodmani, journalist, lawyer and director of the Syrian Center for Media and Freedom of Expression Mazen Darwish, and journalist Edith Bouvier and Paul Conroy. Reproductions of the scraps of clothing on which Nabil Al-Sharbaji and his fellow cellmates wrote their names and documented their experiences during their detention in the Mezzeh military airport prison, will be exhibited during the hearing. The hearing is convened in partnership with the Syrian Center for Media and Freedom of Expression.

The Permanent Peoples’ Tribunal has officially notified the Sri Lankan and Syrian governments of the indictment and invited them to represent themselves during the hearing in order to present a defense. People’s Tribunals are designed to hold states accountable for violations of international law by building public awareness and generating a legitimate evidence record, and play an important role in empowering victims and recording their stories. Their judgments are not legally binding, but aim to contribute to accountability through documentation and public testimony.

“Too many brave journalists were murdered for doing their vital job, reporting the truth. The People’s Tribunal demands justice for these heinous crimes and creates leverage to mobilize states to address impunity for the murders of journalists.”

“The 2009 murder of the prominent Sri Lankan journalist Lasantha Wickrematunge was a terrible blow to press freedom in that country. The tragedy of his murder is magnified by the fact that more than thirteen years later, the government of Sri Lanka has failed to provide justice for him and his family. The People’s Tribunal aims to hold the Sri Lankan government to account by focusing on this courageous journalist who has become a symbol of the price that journalists should never have to pay when they report the truth about those in power.”

“Our initiative goes beyond naming and shaming authorities which allow and benefit from a horrifying impunity level for crimes against journalists. It’s about setting a concrete and useful example of what should be done by an effective and independent judiciary.”